🌧️ Water storage
Deconstructing Industrial is a series that breaks down Industrial sites into their core components and asks - how should we look after them?
‍‍
Thank you! Your submission has been received!
We'll be in touch shortly.
- The Frankie team
Oops! Something went wrong while submitting the form. 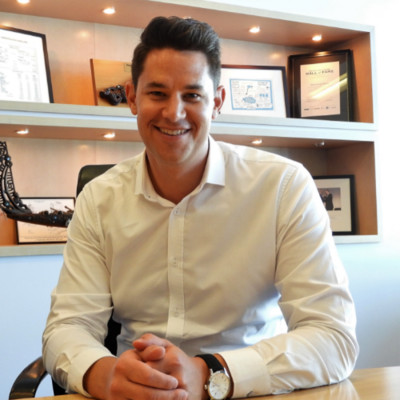 And Mainfreight is putting these to good use with water reticulation and storage systems.

We sat down with Mainfreight New Zealand's Head of Property, Edward Creedy to discuss their approach and learnings.
‍‍

Need to know info about Water storage at scale

Industrial zones are the powerhouse of cities.

Over the next few weeks you'll hear from some of the best in the business as we break down industrial sites to their core components so that we know what we need to do to look after them.

Auckland is in a drought - water levels are 61% almost 30% less than last year's levels at the same time.  But we're not alone - Cape Town experienced an extreme drought in 2015 and Australia is also going through regular water shortages, most notably through summer just gone.

So what opportunities exist for Industrial properties around better water management?

We're joined by Edward Creedy, National Head of Property for Mainfreight New Zealand to discuss their approach to water storage.

Mainfreight have large storage tanks on site to store non-potable water that is then used for the cleaning of trucks and the building itself.
‍
We talk to Ed about how this got started.

So, again one of the early initiatives that Bruce put in place for us was collection of rainwater and use of non-potable water for a site.

I guess Bruce saw that there was a lot of water on the roofs, we had the ability to use some of it for things like truck washing, building washing, first flush.

So piping that non-potable water to things like urinal flushes, toilet flushes, those sorts of activities was quite an easy exercise.

So a lot of water can come off a large warehouse what is done to prevent this all going into the council network?

In terms of as you mentioned, in your rainwater collection.

Rain water signs between you guys so you will often have, for a site this big now most construction and design will actually have a separate line for your stormwater collection from rain as in downpipes and a separate one for your sesspits or in your yard drainage system right from the yard. You could have a diesel overflow etc., etc.

So it's actually more efficient now to actually split the two systems. And the reason why is typically the design requires all of a yard or car park to have some sort of filter/ filtration, whether it be sand filters as media filters or down to a rain garden. So it's quicker to split the volumes and cheaper.

So looking at the water storage capacity versus attenuation, what do you do at this site?

What we have at the site and most sites that you develop, especially in Auckland, for that reason, that you touched on was flooding the council network as you have what's called attenuation tanks or ponds.

So Westney Road here has two sets of attenuation areas.

One is an open pond at one side of the site. And under this concrete that you see under these containers is underground attenuation tanks. They're effectively one and a half metres high, and about two and a half metres wide and they're big concrete tanks.

So all that water from the rain floods into there the overflow from our tanks because there's too much water that we collect. So it holds in the attenuation tank and drip feeds into into the council network, so they don't cause backflow or downstream effects on the networks.

Can you take us through how your storage tanks to sit up on this Railway Lane site?

From there, taking this site Railway lane, we have two areas that we have the tanks.

So we have a series of water tanks at the bottom, the rear of the site or the bottom down the street, and we have tanks on top here as well. The top carpark the tanks up here, so all of these have connections - I've have given you the hydraulic ones as well.

So you can see here, the dotted line here and that circle indicates the downpipes and that's connected back to this tank over here. So on this side of the roof there's a series - 1,2,3,4,  I think it's five I don't believe that one is that's enough water to pick film, and it's now all 20,000 litre tanks up there.  So all of that water's pumped back in, back in full the tanks there in series - fill, fill, fill fill.

And we have a pump that was based out here as well with a bladder on it. And that's then piped back in up to this point here, which is our isolation valve, and that supplies, the offices both first floor and ground floor in terms of first flush, urinals, toilets, etc, etc.

So on the site alone, probably there's six things down and there'll be four here I'm trying to remember to put a fifth now about a month ago I think we put in an extra 20,000 litre up there.

So you're talking in excess of 100,000 litres of water stored just on this one site.   Down in town that we're currently building, I've put in 3x 30 thousand litre tanks. So you've got 90,000 storage with the ability of increase the slab, the foundation slab, so you can put another 2x 30 thousand litre tanks there. So it's all about future proofing the site as well.

So that allows for all the that water to be reused that is non-potable. What we're now looking at is taking a step further and with Auckland and Northland's recent drought issue, it's actually using that water as potable water as well. So through the showers, drinking, those sorts of things. It's a bit like a residential or rural, it's not hard to actually go that extra step. You just require extra micron filters and a UV filter in some locations, killing bugs, etc. and flush that through.

What sort of maintenance requirements do you have for tanks like this?

There's maintenance on the tanks, obviously cleaning up the bottom of them is probably a once a year type of type of event. It's quite simple one, you want to do it obviously in Summer when you have the tanks at their least capacity as well.

The other thing that we have with the tanks is you need a bypass so main supply water as well. So we have a ballcock system and if the tanks get too low we'll talk about mains water often that happens in dry spells as well to give us enough water to a level so that we don't have an issue with water constantly running out.

Just to summarise what we discussed:

-  Water storage tanks, quite easy to install and can be connected to potable or non potable water uses.

- Just like a pool, annual cleaning of the tank and pump filters are required to prevent silt buildup.

- Adding a UV or micron filter to the system can make the water drinkable.

We'd like to thank Edward Creedy from Mainfreight once again.

This series is Deconstructing Industrial, a series that breaks down building components so that we know what to do to look after them.

Get your Industrial properties sorted now.